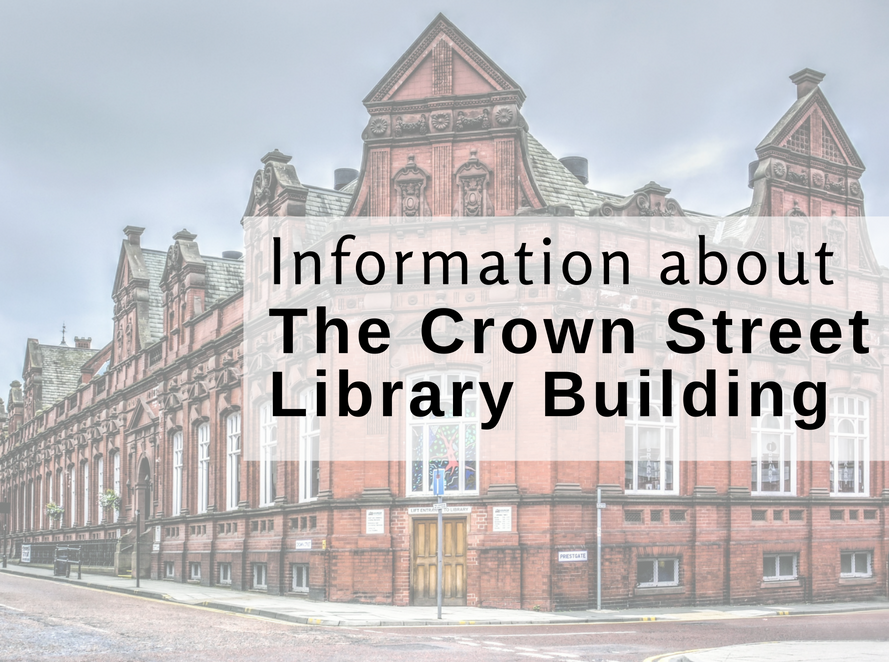 Information about the Crown Street Building

Crown Street library opened in 1885 following a bequest of £10,000 which had been left in the will [pdf document] of a local benefactor, Edward Pease who died in 1880.

The Council understands that the Executors of Edward Pease’s Estate were his brothers, Sir Joseph Whitwell Pease and Arthur Pease. Building work on the original library building commenced in 1884 and was completed in 1885.

The land and buildings which today form the Crown Street Library was transferred in three parts to the Corporation of Darlington. Tranche 1 in 1885, tranche 2 in August 1900, and tranche 3 in July 1930 .

The Land Registry title document [pdf document] shows that the Council holds the freehold of the land. It also states that as the deeds and documents of the title were lost, the land is subject to any restrictive covenants that may have existed before 9thSeptember 2010 and are capable of being enforced.

The Council possesses a statutory declaration [pdf document] made in 1983 by a former Assistant Borough Solicitor which states that prior to the title deeds and documents being lost (thought to be in 1973). His recollection was that Crown Street was held by the Council, subject to a restrictive covenant (over the original part of the library building) that it should be used for the purpose of a public library forever.

In October 2015, the Charities Commission was forwarded a copy of the statutory declaration made by the former Assistant Borough Solicitor and asked to comment on whether the property could be subject to a charitable trust. At that time the response received from the Commission was that there was insufficient information for them to believe that it was.

Despite further searches at the land registry the existence of a restrictive covenant could not be confirmed. Searches were then undertaken at the County Durham Archive, the Teesside Archive, with the Charities Commission and the National Archive’s at Kew, in order to ascertain whether any historical documents existed which may confirm the position in respect of the land holding.

In June 2016, the County Durham Archive advised of a copy of an entry in a ‘Report to Parliament of the Commissioners for Inquiry into Charitable Endowments in the County of Durham (1900-1904)’, which under the heading ‘Public Library’ [pdf document] noted a grant of land and buildings at Crown Street, made in 1885 to the Darlington Corporation to hold ‘in fee simple upon trust for the purposes of a public library.

Following receipt of this document the Council forwarded a copy to the Charities Commission and asked for their view as to whether, in light of its contents, they now felt that the property is subject to a Charitable Trust.

On 21 July 2016 a response was received [pdf document] from the Commission stating that they deem the land to be ‘designated land’ (i.e. land held for a particular charitable purpose) and that the Council ought to treat the land as being held on trust for the relevant charitable purpose (i.e. for a public library).

Implications of the property held on Trust

The Crown Street building being held on trust has implications for the way that any decisions are made about the property itself. Any decision about the trust property must be made by the Trustees.

The library and the land on which it sits was originally gifted to the ‘Darlington Corporation’. The Council is the statutory successor to the Corporation and as a result has the responsibility of ‘sole corporate trustee’.

A meeting of the Sole Trustee (Cabinet members) will be held on 19 June 2017, to consider issues about the Crown Street Library building.

Recommendations to be put before the Sole Trustee include seeking expressions of interest for alternative community uses for the Crown Street building, marketing the building for sale at market value and establishing an Endowment Fund with the funds raised.Click here to read the recommendations in full.

Any future decisions of matters related to the Crown Street Library building will need to be made by Cabinet as Sole Trustee. These meetings will be held in public, advance notice will be given about these meetings and reports prepared for the meeting will also be publicly available in advance.

The meeting on 19 June is the first stage in a process to decide on the future of the Crown Street building - no final decision will be made at this point. More information about the timeline is available in the report prepared for the meeting.

It is also important to note that the Crown Street building has Grade II-listed status, meaning it is protected. There will be strict conditions and limitations to the amount of alterations that can be made by any organisation that takes it over. There is certainly no possibility of the building being demolished.

The future of the Library Service

Decisions about the Library Service in Darlington were made earlier this year. Councillors agreed to move the main library from Crown Street into the Dolphin Centre. This decision followed detailed public consultation on the design and service details of a proposed Central Library Service at the Dolphin Centre [external link]. A more general consultation exercise about proposals for Darlington Libraries closed at the end of May 2016.

Once a decision was made by the Council to relocate from Crown Street to the Dolphin Centre, it then became necessary for Cabinet as Sole Trustee will need to consider what should happen to the Crown Street Building.